I love being let in on secrets….and fortunately my profession allows me to be let in on LOTS of secrets! This romantic little shoot is one of them! Jackie recently contacted me to document her proposal to her girlfriend of 3 years, Laura. These lovely ladies are from Austin but have relocated to Houston. In efforts to plaster their new walls with a bit of home, they planned a weekend trip back to ATX to take some photos of Austin landmarks that they could blow up and frame. Laura had NO idea that the trip would be so much more monumental than that. When Jackie mentioned the Graffiti Park (“Castle Park” as I’ve been told by true locals), I was mega excited. She texted me a few photos of the two of them so I would know who to look for. I had to stay back pretty far to remain unnoticed, too. I paced around eagerly, shooting glances nonchalantly towards approaching civilians to see if they matched the photos I’d been sent.

When Jackie and Laura arrived, I did my best to act as a hobbyist who was photographing some of the crazy artwork while trying to keep one eyeball on Jackie to see when it was all going to go down. I noticed Laura looking at me and whispering something to Jackie. CRAP. I thought FOR SURE I’d been found out. “WHY is that creepy blonde taking our picture?!” HAD to be what she was saying. They continued to admire the colorful walls and fire off some snapshots…. 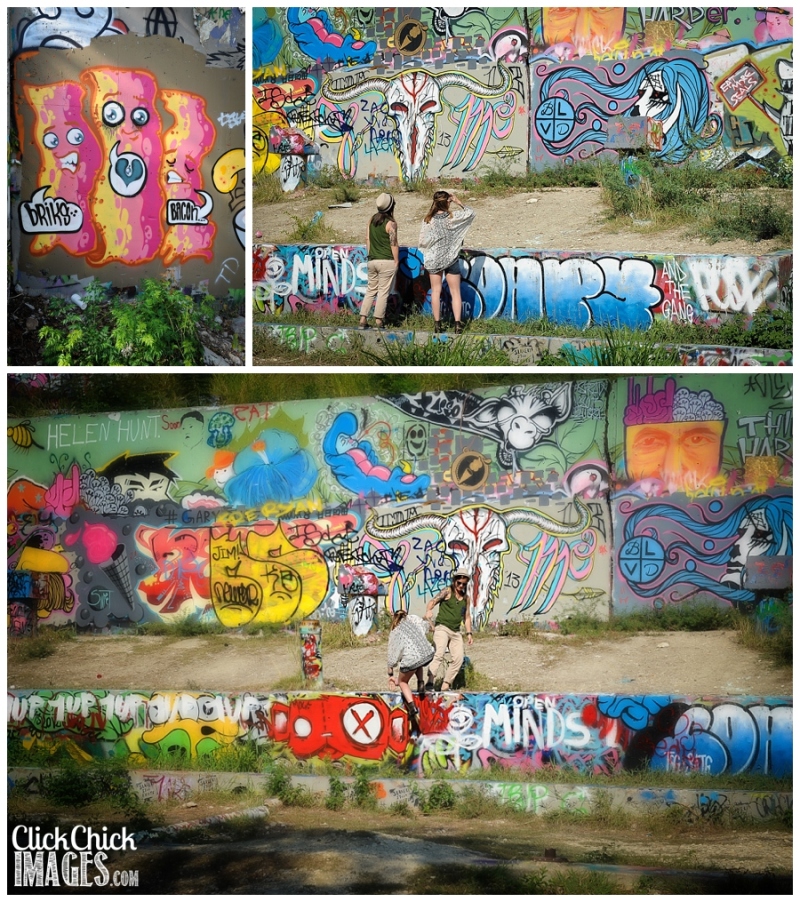 Although I was what seemed like MILES away from the two of them, I was pretty sure that Laura said yes 😉

I ran up to get a closer shot and saw Jackie point to me…Laura turned around to see me there and I knew that she was let in on the little secret that I was there for her.

She covered her mouth and screamed “OH MY GOD! HI! I WANT YOUR CAMERA!” So then I knew what she had been whispering to Jackie.

We had some time to get some photo action in. I barely had to give an ounce of direction at all—I just let the lovebirds relish in their new engagement!

I am so excited for these two–it’s so refresing to witness such geniune adoration in a couple.

Here’s what THEY had to say about their engagement:

Jackie:
“Laura and I have been together for nearly three years, and she had been hinting at getting engaged for the longest time. Maybe hinting is the wrong word, “strongly suggesting” would be better. We went to look at rings for her birthday in July, but I convinced her it just wasn’t a good time. I had to sneak around to get the ring she was eyeing, but the end result was well worth it. I decided to propose on a weekend while in Austin when we were visiting. Laura is from Austin and we had only recently relocated to Houston. I knew that I wanted it to be a special moment and that I wanted it to be documented for the both of us. I narrowed it down to two spots, and told Laura that we would have a day of fun and go around taking pictures of some of our favorite Austin spots.

I decided to hire a photographer and after emailing Kara I knew we were in good hands. She helped me pick Graffiti Park and a better time for the lighting. I decided to take Laura to breakfast first and then we would make our first picture stop at the park. Once we were there the nerves kicked in, but everything went so well. The funny part is Laura spotted Kara and was talking about how she wanted her camera. Once we walked the park I took the camera from Laura and popped the question. And if that wasn’t a surprise enough, telling Laura I actually got a professional photographer blew her mind. I know that we are both excited that we were able to capture that moment and all the emotion behind it. I wouldn’t change a thing about that moment and having Kara there to capture everything made it perfect.”

Laura:
“Since we moved to Houston last December, I had been commuting back to Austin every other Sunday to work because I was having a hard time letting go. We knew the last time I would be going back to Austin was the weekend of August 17th. About a month or so before that, Jackie asked me to take that whole weekend off so we could go explore and take pictures of our favorite spots in the city, which I was totally pumped for. Saturday morning we had planned to go to 24 Diner and then head to Graffiti Park to take some pictures because that place changed every time you go there. She was in a rush to get to breakfast and I was just thinking “I guess she’s really hungry..?”. After breakfast, we headed straight to Graffiti Park, once we got there I remember looking back and seeing Kara (not knowing she was there for us) and saying “Dang, I bet her camera takes really good pictures,” because all I had was my little camera that didn’t have too many options. So we walked to a spot and Jackie took the camera from me. I was so confused. She got a little bit of a nervous face and reached in her pocket and said, “hey babe, i have a question for you” a she pulled out a beautiful ring that I had eyed a while back! I was SO shocked. Seriously I thought it wasn’t going to happen anytime soon. Then she proceeded to tell me that she had another surprise for me and that was Kara capturing the whole thing! It couldn’t have been more perfect and her picking Graffiti Park was the best spot to represent our relationship. She seriously outdid herself. I can honestly say I’m still in total shock!”

CONGRATULATIONS TO JACKIE AND LAURA!!!!

P.S. If you are proposing to someone….you need a ninja photographer there. Your fiance will thank you. Pinky Swear.

For more information on engagement photography in Austin TX, visit the Click Chick Images website. For availability or to book, email Chick@ClickChickImages.com